The Squaw Peak 50 is considered to be the hardest 50-mile trail race in Utah and is rated as the third hardest in the United States (based on average finishing time of its racers); even finishing it is quite an accomplishment!  Last year was my first time running it and it ate me alive!  I finished last year in 13:44 and I was beat to hell afterwards.  I poorly trained for altitude leading up to the race and had bad blister problems during. But I am not about complaining or making excuses; this year was about personal redemption! There was no way I was NOT signing up again for this years race. So instead of whining, I learned from 2013 and went in this year aiming for HUGE improvement.

Such a beautiful loop course

The race starts at Vivian Park, about 6 miles up Provo Canyon.  After a surprisingly good night of sleep and a cool, but not overly cold morning, I was feeling ready to go.  The course starts with a 2.1 mile stretch on a wide, paved trail before it turns up onto the trail and heads up the canyon.  This section is used to spread out the crowd before hitting the single track.  I felt really good in this section and got out to a quick start, settling in somewhere around the top 25-35.  I wanted to get out early because it is hard to pass on the climb up, which definitely worked out well because it was a lot less crowded on the first 8 miles.  Despite jumping out early, I had to stop and take in the view at times because as the sun is coming up around mile 5-6, the views are absolutely breathtaking! 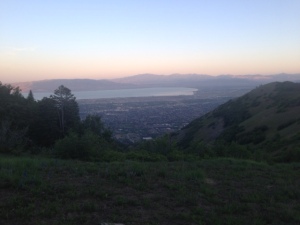 The City of Orem and Utah Lake 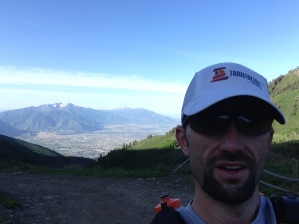 I think this might be the City of Provo

I was definitely in cruise control and feeling great.  I ran into a former co-worker at about mile 13 who was in the early start group.  He said I was probably in the top 20 at that point.  I knew that wouldn’t hold as I didn’t think I could sustain my fast start, but was glad to hear I had a bit of a cushion to work with.  I continued on my way for the first 26 miles or so and was just taking in the beautiful scenery…it was largely uneventful at this point.

Shortly after jumping off of the pavement around Hobble Creek I was still cruising and hit the 27 mile mark in about 5 hours, which I was ecstatic about.  Even though the course difficulty is backloaded, I was feeling good at hitting my goal of 11-12 hour finish at this point.  Like every good plan in a race of this distance though, you are likely to hit a snag.  Somewhere around mile 29-30, I felt a slight tweak in my left glute, which felt like a minor pull.  This forced me to shorten my stride a bit, but I was still able to power through it and continue on.  My climbing was still strong through this point, but I was slowing down a bit on the flats and downhill since the shortened stride was limiting my speed a bit.  I continued to chat with people as I encountered them.  Had a couple people pass me at this stage, but was still feeling in great spirits – enter the second snag!

Right around mile 36-37, we start making the climb to the highest point on the course, which ends with a 1600 ft. climb in about a mile and a half between mile 39 and 40.5.  This is also the longest stretch between aid stations on the course, so I was being cautious with my water by holding off on drinking so I didn’t run out on the big climb.  As it turns out, I was a little overly cautious (my only misstep strategically on the course) and, when combined with the rapid altitude gain and fatigue of already running 40 miles, I started to get a really bad side stitch that reduced me to speed hiking until I could get rid of it.  I ended up hiking the flats/downs from mile 40.5 to the Windy Pass aide station, chugged a bunch of water, then hiked the next 1.5 miles downhill until I dropped below about 8000 ft.  I got passed by about 10 or so more runners in this section, including my boys and fellow Wasatch Mountain Wranglers Tim Shupe and Nate Younger.  Despite the issues, they were relatively minor.  Constrast this with last year, where I had to stop and sit for nearly 40 minutes due to altitude sickness.  At least this year I was always able to keep moving!

More water and hiking to lower elevation ended up being just what the doctor ordered as I was able to run again once dropping below 8000.  I am a notoriously bad downhill runner that is susceptible to rolling my ankles, but despite this, I was still able to throw down some sub-7:00 segments.  I did hike through some of the more technical sessions just to be careful since fatigue was making me a little sloppy, but tried to run every section where I was comfortable with the terrain.

After hitting aid station 10, the final stretch is a rolling descent down the canyon road back to Vivian Park.  I LOATHE this section of the course.  There are few things that suck more than nearly 4 miles of pavement after already running over 46 miles.  I left the aid station with Ironman Triathlete Brian, who was running his first ultra (on his 40th birthday).  I asked him what was harder, and he quickly replied “with this course profile, this was harder than both of the the Ironmans that I finished”.  I will take his word for it.  We ran together for this whole stretch to the finish.  He was grateful for pacing him that last 4 miles…anything for a fellow runner! 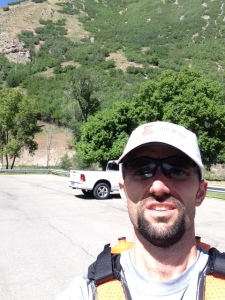 About to hit the pavement for the last 3.5 miles

The best part of finishing (besides being done) is seeing my wife and two daughters cheering me on.  They are so supportive of what I do and I am glad I have them.  As is tradition, Ellie and Kate took me across the finish line.  Watch the video here!  My finish time was 11:32:05 for about 50.9 miles, which is right in the middle of my goal for the day and a crazy 2 hours and 13 minutes off of my time from last year.  To top it off, I felt infinitely better than last year.  I truly love that I get to do this stuff!

Now time for thanks.  Of course, thanks to my family for being so supportive during my training and racing.  Thanks to Josh and the team at Orange Mud for supporting me and letting me run in the new HydraQuiver VP2 (available for sale soon).  See my gear review coming shortly and swing by their site, OrangeMud.com, to view and buy their products! (Use discount code THEMANJOE for 10% off) Thanks to all of my Wasatch Mountain Wrangler friends.  Your support on and off the course helped me immensely!