Topo Athletic is a relatively new company (about two years old) founded by Tony Post, former CEO of Vibram USA.  My impressions of Topo, from what I have gathered as part of research for this review, is that Tony wanted to take a little bit of everything that he has learned from his 25+ years of experience in the shoe industry and incorporate it into the design of their product.  The result is a line of shoes that reiterates natural mechanics similarly to most minimal shoes while adding a little more structure and durability.

I will admit that prior to this review, I was not all that familiar with Topo Athletic.  I had seen the brand around, but had never tried them myself or known anyone that had.  Back toward the end of January, I saw a picture pop up on the Elevation Tat Instragram feed of Trent Beachy (whom I met at Run Rabbit Run in 2013) wearing a pair, so I decided to reach out to Topo to see if they would be interested in having me do a review.  As it just so happened, they were getting ready to release their new trail shoe, the Runventure, and were happy to support my review.  So here it is, the Runventure!

DISCLAIMER: I have no formal affiliation with Topo Athletic, however, they did provide me with a demo pair for my review.

As a relatively new company, Topo Athletic only has a few trail shoe options in their arsenal.  The MT, the Oterro, and the newest model, the Runventure.  The Runventure is very similar to the MT in many aspects.  The main difference is that it incorporates a full length rock plate.  This positions the Runventure in their lineup as a shoe for more technical, gnarly trails versus the MT, which makes more sense as a crossover model for road, rail trails, fire roads and other less technical paths.

The shoe itself takes bits and pieces of its design from several areas.  It is a shoe that incorporates principles from the minimalist movement, such as better toe movement and lower heel-to-toe drop, with a slightly higher stack height to provide more under the foot protection.

Outside of the Shoe

I have included pictures of the upper and outsole below to give you an idea of what they look like.  Here are a few quick observations: 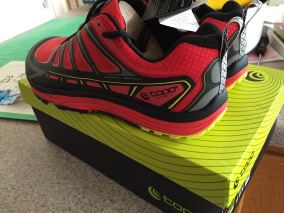 Starting with the front of the shoe, the Runventure features a very wide toe box, similar to what Altra has made popular over recent years.  This allows the toes to splay naturally, providing a more stable platform and allowing the toes to remain in their natural position.  As you move toward the back of the shoe, you experience a much more snug fit with the it wrapping the midfoot and firmly holding the heel in place.  In my experience, this differs from a lot of the shoes out there, which are typically uniform in their fit, either snug or loose fitting from front to back.  It seems that Topo has found a design that allows both a firm fit and freedom of movement where it matters.

This section highlights a few of the runs I had in these shoes accompanied with some of my general impressions from each of those runs.

Test Run #1 – 4.5 Miles: non-technical, dry trail conditions (Strava Link)
I swapped into these shoes and tacked this run onto the end of 18 miles just to get an initial feel for the shoes and break them in a bit.  I wasn’t looking to put them to the test, but instead just get a sense of the fit.  Overall, I was happy with them out of the box.  They didn’t seem to need much of anything in terms of a break in period.  I can confirm this is true after having since put additional miles on them.

Test Run #2 – 9.5 Miles: semi-technical, mixed trail conditions (Strava Link)
This run turned out to be the most telling of my tests as the recent warm weather in Salt Lake City created a mixture of dry, muddy, and snowy conditions as I moved in and out of shaded areas and higher and lower elevations.  This allowed me to focus on testing the traction of the shoe quite thoroughly.  I was really impressed with how the shoe handled on both dry and snowy conditions.  The lugs were deep enough to grip the trail nicely, which gave me a sense of confidence while running.  The lug pattern seemed to facilitate both up and down hill running equally well.  In the mud, the shoe also gripped nicely, but they definitely didn’t shed mud as well as I had hoped, most notably in the heel.  I am a midfoot striker, so it didn’t really impact my traction in the mud,  but the slight contact my heel made with the ground allowed mud to collect on the heel, weighing it down a bit.  One thing I really liked with the shoe was how it handled traversing over shale rock.  A combination of the tough outer and the rock plate made gliding over it easy!

Test Run #3 – 18.0 Miles: semi-technical, dry trail conditions (Strava Link)
This run, for me, was all about how well the shoe held up over a longer distance.  I should note that I am used to running in shoes with slightly more cushioning and stack height for much of my longer runs.  This was evident after about 15 miles when my legs started to feel a bit beat up.  I know many runners out there will be better adapted than I am, so this is likely more of a personal issue.  The other thing that I look for with shoes on longer runs is the development of hot spots or blisters and, for me, these usually surface around 10 miles into a run.  I had no problems through 18 miles with these, which confirmed my initial impressions about the great fit and comfort.

While it is true that Topo is a relative newcomer, it it clear that they bring a wealth of expertise in shoe design to the table.  With the Runventure, I get the impression that they knew what they wanted the shoe to be and executed on it.  It has a great fit and appears to be quite durable.  A couple tweaks aside, I had a pretty good experience with the Runventure.

I think this would be a great shoe for a minimalist runner looking for a slightly more cushioned trainer or for someone looking to transition down to a more minimalist feeling shoe.  The 2mm drop seems to be a growing trend recently.  I have struggled trying to transition to zero drop in the past, but it seems that even a minimal 2mm drop made enough of a difference that I didn’t have an issue with them (although I was careful not to overdo it).  Honestly, I really enjoyed running in this shoe I will likely buy more of them in the future to keep them as part of my rotation.

Update on May 13th, 2016: A year after this review, I loved Topo shoes so much that I ended up joining their athlete team.  As a result, I can now offer you a 10% off code if you decide to try them out!  Just use TOPODEAN10.