I hope that Peter Jackson doesn’t sue me for stealing the tagline from the first Hobbit movie, but it really does describe my experience at the Grand Canyon 50K this past weekend (in more ways than one).  Before I get into my race report though, I have a confession to make…I am a terrible Utahn.  I have called Utah my home for eight years now and have woefully neglected much of the natural beauty that the West has to offer, especially in and around the National Parks.  As my kids get older though, we are slowly starting to remedy that…the Ultra Adventures Grand Circle Series is pushing me along too.  With each of their races taking place on the doorsteps of the most beautiful parks in the country, racing is helping me to discover what I have been missing all of these years.  This past weekend, I got to check off the Grand Canyon from my list!

Now, I mentioned that this race weekend was unexpected in many ways, the first of which was the weather.  Last year, the race saw 80-degree conditions and lots of dehydrated racers.  This year was much different as you can see from this picture. 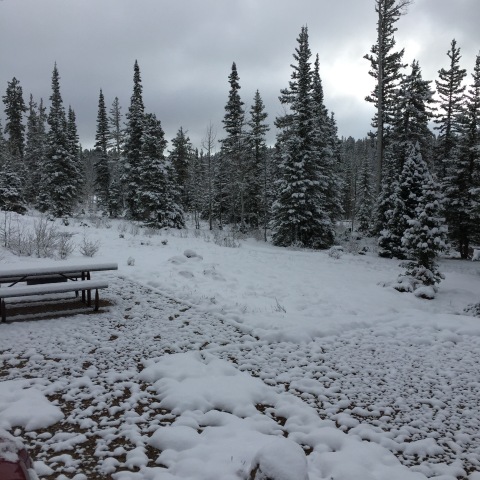 The race weekend saw overnight temperatures in the 20’s and close to 6 inches of fresh snow.  Luckily, my wife and I decided to buy a camper the week before because I would have been miserable in a tent!  🙂  The sudden shift in weather caused Matt Gunn, the race director, to make a change to 3 of the 4 courses because of shuttle inaccessibility to the start lines.  As with any trail race, you have to be prepared for such last minute changes.  I will say that Matt made the right (and safest) decision to modify the course and, despite the last minute nature of the changes, still coordinated a beautiful and flawless race event.

For the modified 50K course, we actually ran what was the original 25K course out and then back.  Because the 25K course was actually 17.5 miles in each direction, we ended up with about 35 miles overall, but that just added to the adventure!  The course started with a steady climb up the road behind the DeMotte Campground.  As you can see in this picture, there was some decent snow, so much of us were trying to run in the ATV trails heading up.

I got out to a pretty good jump with the lead pack and was running in 5th/6th up to the second aid station at about mile 9.  With the temperature still low, the trail conditions out to the turn around at mile 17.5 were actually pretty good.  Most of it was on top of the snow or fire road, with only a few muddy spots.  It was early on that I made a strategic decision that would play a critical role in my day.  I knew that as the temperatures started to rise that the quality of the terrain would soon change, so I decided to press on the gas pedal a little more than usual for the first half of the course.  I figured that if it did start to get really muddy that I wanted to get out in front quickly after which the eventual mud would start to slow everyone down enough that I could hang on.  Coming in to mile 9, I made a quick aid station turnaround only to fill my bottle up before moving on.  It was at this point that I think I moved in to 3rd, although I thought I was still around 4th or 5th.  As I continued to push my pace, I did not see many 50K runners for awhile, although knew I was on track because of the exceptional course markings.  Through mile 16, the course takes you through the beautiful Kaibab forest on the North Rim, however, once we got to mile 16, we were rewarded with a view so fantastic that I had to stop and take a picture!  As it turns out, this was the only section of the course that was pretty dry (due to its sun exposure and proximity to the edge of the rim I suppose). 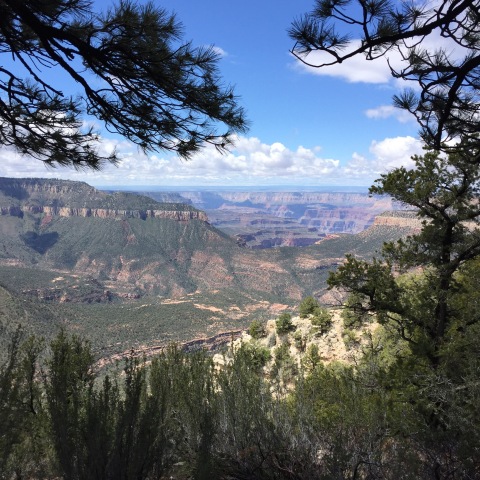 After I took a picture, I kept running.  I finally passed the two lead 50K runners and realized they were only about a half mile ahead of me.  This was completely foreign to me and I was honestly in a bit of disbelief.  I usually run strong, but I was having a really good day.  The question then became, could I hold on?

Heading back from the turnaround, things started to get interesting as the course quickly became wet and muddy as I expected.  From this point on, it was about running whenever I could manage it and speed hiking when I couldn’t.  It was so bad in places that attempting to run was actually slower and more difficult.  As someone that practices speed hiking in my training, I think this actually may have played to my advantage because it put me on a more level playing field with some of the guys that are typically faster than me.  My strategy here was to keep moving forward as quickly as possible and to keep aid stations to under 1 minute.  As I did this I kept looking over my shoulder expecting runners to catch up to me, but they never came.  With a mile left to go, I came to the last downhill toward the finish line, which was wet, but not terribly muddy.  After 34 miles, I knew I would be devestated is I let someone catch me so close to the finish line, so I turned on the jets.  When I crossed the finish line, they confirmed that I was 3rd and handed me the award, a handmade tomahawk.

This brings me to yet another unexpected part of the weekend.  While I do consider myself a pretty strong runner, I never imagined that I would end up with a Top 3 finish.  I thought that maybe if I had a great race day, I could crack into the Top 10.  Call it lack of self-confidence or whatever, but I was just not expecting this!  Conditions aside though, everyone ran the same course and on this particular day, I did well enough for a 3rd place finish.  What I do take away is that all of the hard work I have been putting in is paying off and I will aim to use this as a momentum boost for the rest of my race year.

I have to thank a bunch of people for this.  My family, obviously, for their continued love and support.  My sponsors, who see potential in me as an athlete and as a loyal ambassador for the brands that I love and rely on.  Lastly, Matt Gunn and his volunteers, for putting on a phenomenal race series that gives me a perfect opportunity to experience all of the beauty that the Great West has to offer.

One of the things I love the most about the Ultra Adventures races is the emphasis on turning the events into an experience and enjoying everything the area has to offer outside of the race event.  One of the ways they promote that is with their Trifecta Challenge.  Each race has 3 additional routes that you can do, in addition to the race itself, that highlights the surrounding area.  For those that do it and take a picture with their bib at a certain spot, Matt will even reward you with a discount on future races.  As a bit of aggressive active recovery, I decided to head down into the canyon to Roaring Springs with a friend of mine.  As a first time Grand Canyon visitor, I didn’t want to pass up a chance while I was there.  It was absolutely breathtaking!  If you ever get a chance to hike down into the Canyon from either rim, I would urge you to do so…it is an experience you will never forget!